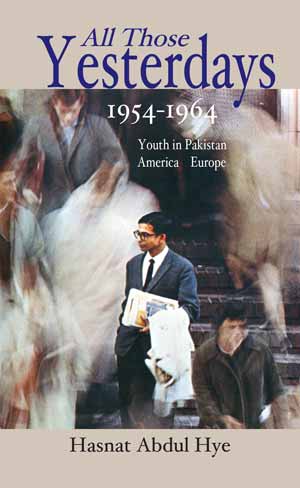 All Those Yesterdays 1954-1964 : Youth in Pakistan America Europe

In this book, the second volume of the authors autobiography, the period covered is 1954-1964 which represents his youth. During these years he studied in Dacca College (1954-1964), University of Dacca (1956-1960), University of Washington (1960-1962) and London School of Economics (1962-1964). Straddling three continents, his youth was spent in cities including Dacca, Seattle, San Francisco, Chicago, New York, London, Helsinki, Berlin and Paris. Following his wanderlust the author journeyed by car, bus, plane and train over land and ship across the Atlantic Ocean. His travel experiences are narrated vividly, using facts and where necessary, imagination. In terms of narrative for autobiography the author has developed a unique style which is off the beaten track. The author has described his student life in the three continents and in parallel has told about pursuit of his interests in arts, literature, politics and history. His depiction of persons whom he met and the places visited are brief but captivating. As in the Aide-Memoire, the first volume of his autobiography, here also he uses third person singular as the narrator which lends a measure of objectivity. Wit, humour and pathos find their place in relevant contexts, making the writing intimate as well as universal in appeal.