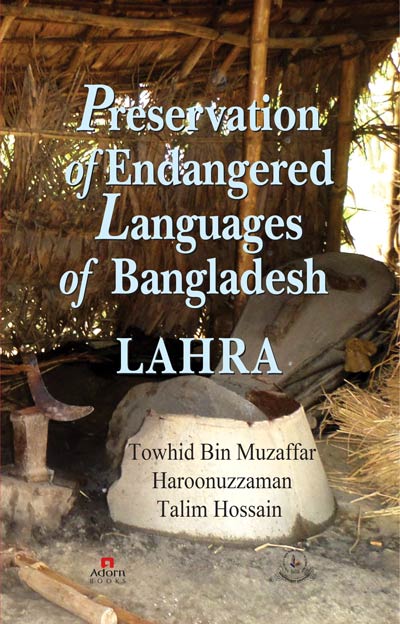 Preservation of Endangered Languages of Bangladesh LAHRA UNESCO states in its official website that out of the 6000 plus languages spoken today, about half will become extinct in about a hundred year. Keeping in view the approaching era of a drastic language loss around the globe, a multi-disciplinary research team comprising linguists, literary experts and ethnographers from The Independent University, Bangladesh have embarked on a significant and noteworthy longitudinal study from 2012, involving extensive field trips for data and song collection, case studies and interviews. The primary objective of the exploratory study is to preserve those languages which are endangered in Bangladesh. Our project entitled Preservation of Endangered Languages funded by Independent University, Bangladesh (IUB) has three components namely, linguistic, literary and ethnographic. In response to the demand of the time, the research team of IUB worked on a project with a view to saving Lahra-a marginalized ethnic community’s own language and successfully furnishing a tremendous documentation of an endangered language. The challenging task of the documentation of the language required remarkable attention, systematic and scientific endeavor in general, while the gathering of unwritten and previously unrecorded language of Lahra ethnic community was unspeakably difficult, in particular. This language documentation would, hopefully, save an endangered language of Bangladesh and would save the Lahra culture from the threat of extinction.