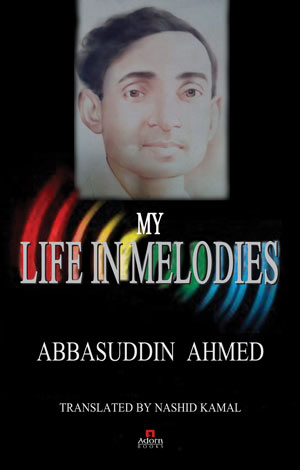 My Life In Melodies [Translation]

Abbasuddin Ahmed is a legendary name in undivided Bengal, which includes West Bengal of India and erstwhile East Bengal which is currently Bangladesh. He was a vocalist of repute, attaining unimaginable heights of popularity for his original style of singing as well as his contribution to the field of folk music, especially Bhawaiyya, which was his native song from Cooch Behar. He is highly revered for his pioneering role in breaking the taboo amongst the Muslims of Bengal and choosing music as a career, which was highly dominated by Hindu performers. The tunes that he brought forward are being constantly used and improvised even in the Bollywood scenario. More than fifty years after his demise, Abbasuddin continues to be a household name in both West Bengal and Bangladesh. In every cultural soiree, in every part of the world where Bangladeshis live, his songs are sung and he is remembered through those songs. His own story, therefore, needs to be translated and read by those for whom Bangla is no more a mother tongue. Through this translation, We hope that the non-Bengali audience, both of Bangla origin and otherwise will read his story of struggle and success and the fame that he enjoyed in the period 1930 to 1950s.