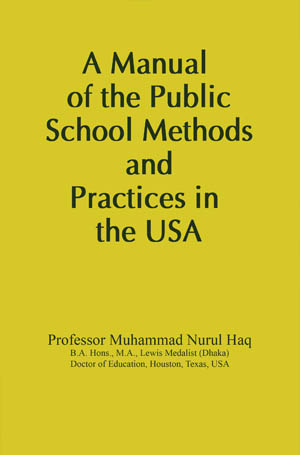 The writer, Dr. Muhammad Nurul Haq, is a unique personality in the field of education in our country. He was born in village Mohira, Thana Patia, Chittagong in 1927. As a meritorious student he was prevalent among his teachers and fellow mates. He passed his High Madrasa and IA with government scholarships from Chittagong Islamic Intermediate College in 1941 & 1943 respectively. He completed his Honours and Masters Degree securing the first places from the Department. of English, Dhaka University in 1946 and 1947 respectively. He was awarded the Lewis Gold Medal and Prize from Dhaka University for his outstanding achievement. During the Pakistan reign, he received a teacher’s exchange scholarship from Houston University, Texas, USA for PhD in Education Administration. He was included in the Dean‘s Honour list. After the Liberation War, he contributed immensely as one of the leading educationists of Bangladesh during the reign of President Sheikh Mujibur Rahman (First National Education Commission, Kudrat-e–Khuda Commission, 1972-73), President Ziaur Rahman (Member, Advisory Council, National Education Policy, 1979) and President H.M Ershad (Member, Prof. Mofiz Uddin Commission,1987-88). He served as the Principal of Mymensingh & Dhaka Teachers’ Training College and Director of NAEM, Dhaka. As an Assistant Director, Education Deptartment, Commonwealth Secretariat, London – the first Bangladeshi Diplomat to represent his country in this International Organization and brought honour to his country. Since his return from London, he served as the founder Director General of NIEAER till his retirement in 1988. Besides, he contributed to the National Education Policy through his responsible positions as Member, Dean, Convener, Director of various committees of Dhaka University, Jahangirnagar University, various seminars, symposium and workshops both home and abroad. Following his retirement, he was appointed advisor to the Grants Commission, Bangladesh National University for 2 years (1989-90). During the Liberation War in 1971, he was convicted by the Pakistan Army for aiding the liberation fighters and was freed later. Being always against publicity in his personal life and a reluctant writer, he creates an emptiness in his glamorous career. His articles were published in some renowned newspapers. He was honoured as a Life Time Achievement Award by Bangladesh Today in 2006. He also served as the President of Advisor and Trusty Board of Chottagram Samity. His role as the founder of the present Organogram of the Samity and his strong leadership during the crucial times of the Samity in 1988-89 are still recognized with much respect. He was honoured for his outstanding contribution by the Chottagram Samity in 1990.